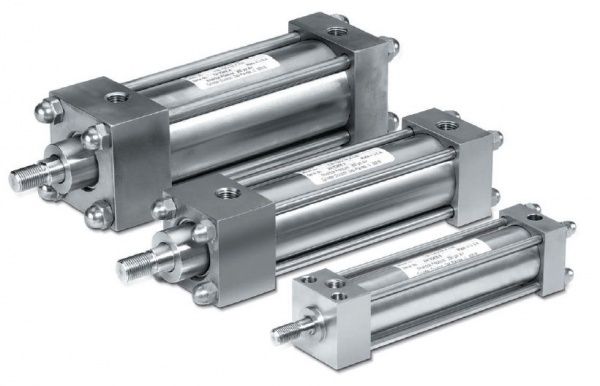 A pneumatic cylinder is also called pneumatic actuators is a device that is used in industrial automation applications to provide motion and force. A pneumatic cylinder uses compressed air to create force. This device is widely used in automated systems, machines, and processes. Movement of the products is done directly or indirectly by the pneumatic cylinder and the load will be moved by pushing, pulling, etc. These devices are not costly and can be installed easily. This device can create a huge amount of force over a board range of velocities without overheating or internal damage. Its operation is not affected by its environment conditions like it can be used in dusty and high humidity locations.

How does a pneumatic cylinder work？

This device uses the pressure imparted by the compressed air to create a driving force in one direction and it would return back to its position with the help of a spring. The extension of this cylinder is limited because of the space that the compressed spring uses. This device has another disadvantage that it would lose some force when it tries to push the spring and because of this, the single-acting cylinders are not used in applications where high force is required.

What are the advantages of a single-acting cylinder？

What are the disadvantages of a single-acting cylinder？

What are the advantages of double-acting cylinders?

What are the disadvantages of double-acting cylinders?

It uses compressed air for each movement

In the event of compressed air failure, there is no defined position

How pneumatic cylinders are constructed and what are its parts?

According to the specified applications the pneumatic cylinders are constructed in multiple forms. The most common cylinder construction is tie rod cylinders and it is used for many types of loads. Flanged type and threaded end cylinders are the other type of construction. The material that is used for the construction would range from nickel-plated brass to aluminum and also steel and stainless steel are also used. The material is selected according to the level of loads, humidity, temperature, and stroke. 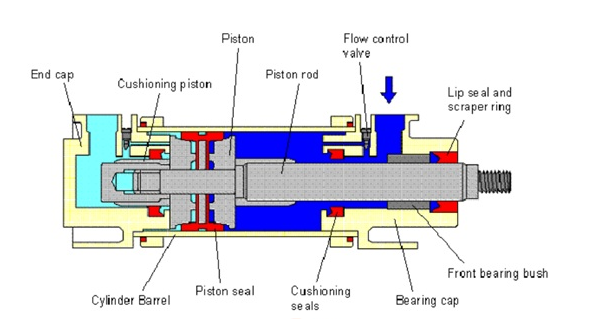 Cylinder barrel – it is the section in which the sensors and other attachments parts can be mounted.

Pistons – this part is connected to the piston rod, and this will help for the proper movement. It also acts as a seal between the front and rear cylinder chamber.

Bearing caps – this part closes the cylinder on one side and it would also act as a bearing and the sealing point for the piston rod.

End caps – this part will close the cylinder on the other side. Mostly the second air connection can be seen in end cap.

What are the applications of pneumatic cylinder?

It can also be used for certain purposes such as moving, holding, or shaping the object